The older I get it seems the less time I have! As I sit on the plane back to Perth I have just finished editing an article for the new Broome Visitors Centre Magazine and finally got a few minutes to pen our latest blog.

It’s been a busy month with Contessa C out of the water for refit. No major works planned this year but definitely a month of steady work getting her ready for our Broome Fishing Charters and Eco dolphin Cruises. 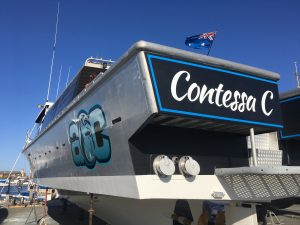 New crew members Henry and Shar have been helping out doing some paint touch-ups, cutting and polishing and cleaning bilges. A new clear coat and stickers were put on the hull sides and a new security system installed so we can keep an eye on the boat where ever we are. Along with that we fitted some new stereo speakers fixed lots of little bits and pieces did some work on both the genet and main engine. A new anchor winch switch in the wheelhouse means the crew don’t have to stand on the bow in the elements dropping the anchor…. We look after them! The new deckies are definitely looking forward to getting the boat back in the water and doing some fishing charters in Broome. As am I!

A quick flight to Broome last week to sort out some paperwork for our Broome fishing charters and Behind the scenes of most importantly be there to see our eldest blow out the candles for his 7th birthday! I attended an interesting meeting held by DPAW and Fisheries (they have been renamed but not sure what to! Or what for!!) in regards the new Marine Parks, native title and lots of other bits and piece I am sure you will hear about in the media shortly!

Along with birthdays and work meeting we also moved house! Unfortunately, our house was damaged in the storms over the wet season. In short; while we were away refitting the boat, we had some water ingress through the roof and part of the ceiling collapsed. The worst part was the water tripped the power and because there was no lights and fans, we had mould growing everywhere. Carpets, blinds, lounges and lots of other stuff were condemned and sent to the tip. We even had mould growing out of most of our timber furniture! Anyway, we are in a rental while the house gets fixed. I cannot wait to get back into our normal swing or things and do some fishing charters and eco tours.

Some of you may know; Kelly is having another baby! In 7 week there will be a new little brother or sister for Jesse and Casey and we will be looking after another future decky. It has definitely been interesting times and Kel has handled the setbacks of the house like a trooper! It certainly hasn’t helped that I have been in Perth for the refit. Don’t be surprised if you don’t see Kelly around the AOC office too much this year, she will be busy looking after the new addition. Don’t worry though, she will be keeping a close eye on things behind the scenes and making sure the standards don’t slip on our Broome fishing charters and Eco Snubfin dolphin cruises.

Tomorrow, I will be up early and antifouling the hull of Contessa C. We will do the shopping for stores and tidy up a few loose ends. Friday morning, we will wet the bottom, do the compass adjustments and head for Broome. That’s if cyclone Marcus doesn’t get in the way. Our Broome fishing charters and Eco Snubfin Dolphin tours are just over a week away but I know that time will fly by! Wish us luck for the trip North!!