We are well and truly back into the season now. Five Broome fishing charters down and who knows how many to go. Not a bad start to the season really, with 5 charters in 8 days. Things look to carry on too, with quite a few bookings over the school holidays.

Contessa C is now back at Gantheume Point and I would have to say it makes a nice change from the industrial side of Roebuck Bay. Everything is just a little bit harder or bit further on the bay side and it is great to turn up on the beach at Gantheume early morning and basically have it to yourself. We are the only boat at Gantheume at the moment but I doubt that will last too long. 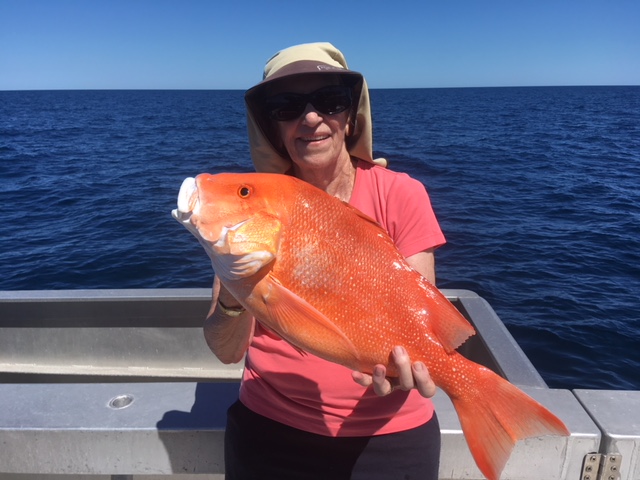 The weather has been perfect with very little swell and wind that hasn’t been above 10kts, it has been pretty hot though! Mostly around the mid to late 30’s but the ‘feels like’ temp has been well into the 40’s. You certainly earn a beer and dip in the pool after a hard day working on our fishing charters in Broome.

The first couple of days out we had one of our fill in skippers, Ross, driving the boat for us. He did a great job sounding out the grounds for fish while I spent the days on deck training our new crew. The crew, Henry and Shar are learning quickly and look like making good deckies. Although, with a teacher like me there is no surprise that they are picking it up so well!

Bottom fishing on the Broome charter has been a bit hit and miss with the water still quite warm and the shallower reefs not firing up yet. Not to say we haven’t been catching any fish. We have landed quite a few good Golden Snapper in the first outings, along with good catches of Red Emperor, Crimson and Saddetail Perch, Rankin Cods, Blue Lined Emperor and a couple of nice Cobia. 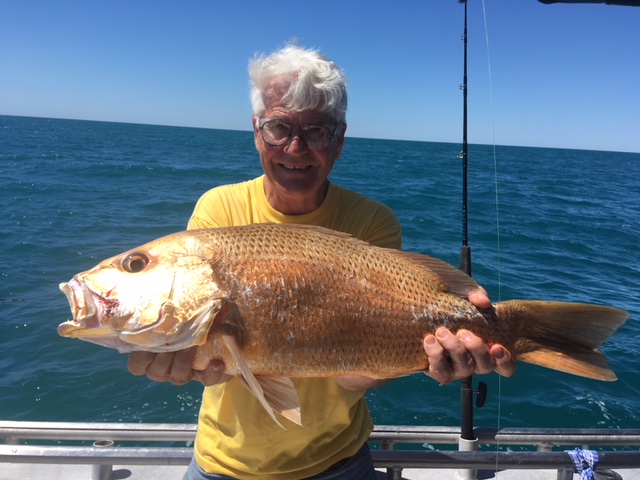 What is surprising to see on our Broome fishing charter is how many Spanish Mackerel are about so early in the season! In the big tides over Easter we found a few of our regular Mack patches holding good numbers of fish and one in particular had a heap of hungry fish smashing lures cast from the back of Contessa C. We landed double figures of Spanish Mack’s in quick succession and then left them biting.

If you are coming up to Broome get hold of a copy of the Broome Visitors guide and have a read of the editorial I am invited to do each edition, there is also an awesome new ad designed by Brendon from www.dilate.com.au it was awesome to get some fresh eyes on some of our marketing.

Jump on our bookings page and send us an enquiry if you’re looking to get out for a fish.
www.absoluteoceancharters.com.au/bookings/