We are almost back to start our fishing in Broome. It has been a great trip north with good weather most of the way. The usual southerly wind pushed us north away from Perth, the 20-knot wind is quite comfortable if you are travelling with it. We did have a rough night passing the Zuytdorp Cliffs. The 4m to 5m swell offshore was generated by category 5 cyclone Marcus which was 1000 km to the west of us. This big north swell meant we couldn’t transverse the South passage at the bottom of Dirk Hartog Island and we had to travel the extra 50nm to the North end and the head across to Carnarvon.

As the weather wasn’t too flash south of Carnarvon meant we didn’t do too much fishing, we did spot a bait ball getting chomped by all sorts and turned around to flick a couple of soft plastics into the action. First cast and decky, Shar had a nice little Skipjack Tuna in the boat. There were quite a few sharks on the bait ball which excited the new crew who aren’t familiar with the Broome Fishing and how bad the sharks can get. There was also half a dozen cobia in on the action and we did have a couple bump the lures but no hook-ups.

We arrived at Carnarvon early morning and the new crew got stuck into cleaning down the windows and fresh water washed. One of my old school mates, Clay, popped down for a visit and helped me fuel up while we had a cup of coffee and a chat about old times. He is a great supporter of Absolute Ocean Charters and was still wearing his AOC hat from when he brought his family fishing in Broome a few years ago.

Mid-morning and we were out in some blue water off the Quobba coast so we rigged the 50w reels with some big lures. There were promising signs with birds working and good mark-ups of bait on the sounder, it reminded me of the Broome fishing and got me a bit excited for the season to start. My watch came on at midday and Henry was sent out to be on lure watch. The young fella must have been a little weary and fell asleep while lounging on one of the daybeds out the back. A large band out on the back deck got my attention and I raced out there to investigate. Henry was sound asleep and one of the 50w reels was spooled (all the line gone). We must have hooked up to a good fish and with the ratchet going full noise until the line reached the end and snapped off, young Henry slept through the whole ordeal. 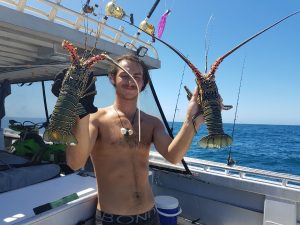 We travelled through the night and arrived at the Montebello Is the next morning. The Montebellos are always a welcome sight with the picturesque islands and rocks jutting up out of the crystal-clear waters. I always want to spent more time there than we have! Anchoring up at the North end of a little rocky out crop we donned our dive gear and jumped in to explore the world below. We collected a few Ornate Crayfish for lunch and were on our way again steadily making our way back to the fishing in Broome.

Late arvo and I spotted some new ground on the sounder so we decided to have a drop. We caught quite a few good fish off this little spot including Spangled Emperor and Rankin Cod. The new crew were happy to finally tick off a couple of Northern species before we start our Broome fishing with Henry landed a cracking Red Emperor and Shar a nice Rankin Cod. It won’t be long until they are showing the customers how it’s done. Fishing in Broome starts this Saturday…. Bring it on!!