Occasionally at this time of year my mind wanders to the Humpback Whale and our Broome whale watching charters. These amazing creatures would be down there in the Antarctic hunting krill and small fish, doing their best to put on some body fat to get them through the long migration to Broome and beyond to the Kimberley. It will only be another month and they will start heading north. We usually start to see the odd Humpback Whale on our fishing charters in May. Their numbers increase throughout June and there are generally enough whales close to shore to start whale watching in Broome at the start of July. 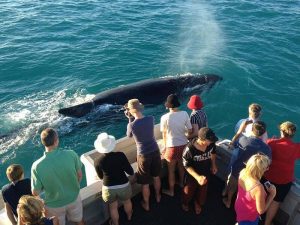 The Humpback Whales are the 5th largest of the great whales. There scientific name means great wings due to their oversize pectoral fins however the name ‘humpback whale’ comes from the way in which the arch their back when doing a deep dive. They can grow up to 19m long and weigh up to 36 tonnes. They can swim at a top speed of up to 25km per hour but usually cruise at 10 to 12km per hour. This means when we start our whale watching in Broome they have travelled roughly 6500km in approximately 2 to 3 months, surely that long swim would make you a little hungry.

The Humpback Whale is a baleen whale, which means they don’t have teeth. Instead they have a row of curtain like filters. The whales feed by moving through large schools of krill or small fish, they suck in a big mouthful of water and then push the water back out through their baleen plates leaving the krill or fish in their mouth. Occasionally humpbacks will use their large pectoral fins to slap the water and stun the small fish making them an easier target. They are also great team hunters and use a method described at bubble netting. This is where a pod of whale’s swim around a bait school blowing bubbles to trap the bait in a confined area and force them to the surface. Then the whales will take turns to come through and gobble up a mouthful of fish or krill. Certainly, an awesome way of hunting that ensures they use the least amount of energy to get their dinner, helping them put on as much body fat as possible for the long trip north where the food is less plentiful…. But not nonexistent! 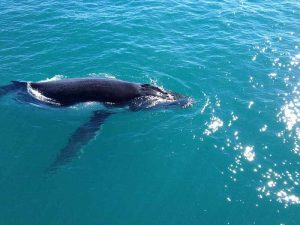 It was thought that the humpback whales did all their feeding in the colder waters of the Antarctic. However, there is a shift in this belief as we get to learn more about these fascinating creatures. On our Broome whale watching charter we have definitely witnessed a pair of humpback whale moving through tightly bunched schools of baitfish on the surface or the ocean. It is also interesting to note that occasionally when viewing the humpbacks on our whale watching charter in Broome we have seen them spending an extended time underwater and then a school of baitfish will take refuge under the boat closely followed by the whales.

If you need any information on our whale watching tours in Broome follow this link to our website,
absoluteoceancharters.com.au/whale-watching-cruises/