The Red Emperor would have to be the most iconic reef fish of the north west, everyone on our Broome fishing Charters wants to catch one! The Red Emperor is part of a large family called the Lutjanus, which includes the Mangrove Jack, Golden Snapper, Maori Sea perch and close cousins the Saddle Tail Sea perch and the Crimson Sea perch.

They are an amazing fighting fish that usually never give up until they reach the surface, nothing can prepare you for the arm stretch that a really big Red Emperor will give you. On our Broome reef fishing charters customers often call a Big Red Emperor as a Big Trevally when they are trying to guess what fish they may be hauling in. Their capacity to rarely have trouble with barotrauma (a condition experienced by some deep-water fish that are brought quickly to the surface) means they are fit to fight the whole way to the surface and can be easily released if need be. 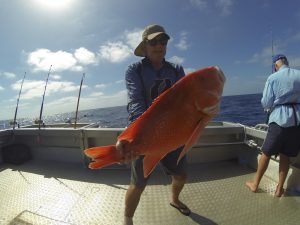 Red Emperor can be found around the shallow reefs in Broome in as little as 8 to 10 meters. However, the really big Red Emperor are usually found in the deeper water 40 meters and more. In the shallower areas they are can be found around rocky outcrops and reefs. On our fishing charters in Broome we seem to catch a lot of red emperor to 50cm in this area. Once we get out to 40m and beyond we look for small lumps, rocks and even schools of baitfish. This is where we normally find the bigger reds.

On our Broome fishing charter, we have been successful catching Red Emperor on most baits and jigs. Knife Jigs probably being the least successful followed by the octojigs and the soft plastics. By far, the majority of Red Emperor are taken on a well-presented bait. A go to bait would be a small whole squid on a pair of snelled hooks then a strip of fresh fish for good measure. My favourite would be a small whole fish called a Rosy Threadfin Bream, these fish are often caught out on the Red grounds. If a nice small 10 to 15cm version can’t be found, cutting the head and shoulders off a bigger one and pinning the hook through the lip has has proven successful many times. You can guarantee only a big fish will eat this bait so make sure you are hanging on!

While the smaller Red Emperor caught on our fishing charter in Broome are released, the bigger ones are usually kept for dinner. Cooked whole, the red emperor is an amazing centre piece at any dinner party. The fillets are thick and white and delicious to eat pan fried and finished with lemon and butter. One part of the fish that people often disregard is the wings. Red Emperor wings are absolutely delicious when prepared the right way. Wings are firstly removed from the frame by twisting and snapping the connecting bone then cutting through the skin and flesh. The wing can then be skinned by working your thumb up and under and pushing until the shin comes off. A good wash and trim to remove all the blood and stomach lining then pat dry with paper towel and add a generous amount of salt. I usually put about 5 to 10cm of oil to a wok and heat on high. When the oil just starts to smoke, slide your wings in and fry until crisp in the outside and tender and moist in the middle. A delicious entrée served with some soy aioli and a cold beer.

See you out on our Broome Fishing Charter to catch a Red Emperor!