Affectionately name the Blue Bone in the North West, the Black Spot Tuskfish is part of the Choerodon schoenleinii family and is a type of wrasse that is native to the Indian Ocean and parts of the western Pacific. A favourite habitat for the Blue Bone are rocky outcrops however on our Broome Fishing Charters we catch a few on broken coral and garden bottom. They are mostly found in shallow waters from 5 to 20m. Sized fish are 400mm and they can apparently grow up to 1m in length. The biggest on we have recorded captured when charter fishing from Broome is a whopping 68cm. Although a more common size is between 50 and 60cm. 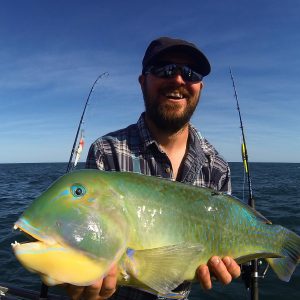 The Black Spot Tuskfish will take most well-presented baits and on our Broome Fishing Charters we have caught them on both squid and fish strips, the two most common baits used. One particular bait that has been quite successful is the meat from a bailer shell. Obviously, the shells are not that easy to come by but we have found that when gutting a Blue Bone, occasionally there will be the meat from a Bailer or Conch shell in the stomach. Rig this tough morsel on your hook and wait for the next Blue Bone to come hunting its lunch. Prawns or fresh rock crabs are also a notable favourite bait, although the prawns do come off the hook quite easily.

It’s important to use the right gear when targeting the Black Spot Tuskfish. Reels with locked up drags, heavy braided line and good quality leader in the 100lb range is recommended. I prefer the running sinker option and keep the weight as light as possible. Solid 8/0 circle hooks would also be my choice. The Blue Bone is renowned for tough dirty fighting where they will take a bait and bolt for the nearest rock ledge or hole. If you’re not ready to go hard on the fish straight after hook-up you will be snapped off on the rocks. It’s not a good idea to sit your rod in the holder and wait, you need to be holding your rod and ready to go!

On our Broome Fishing Charters we had an angler not paying too much attention and the rod was ripped from his hands and into the water. After a bit of commotion, the gentleman next to him had a dead weight on his line and wound in to see what was on the end, he had hooked the fellows line that had dropped his rod and reel. We quickly pulled in the line to get the rod and reel back and the embarrassed fellow that had dropped his rod started to wind it in, only to find there was a good fish sill on the end. After a quick fight a great sized Blue Bone was in the net. Moral of the story, hang on tight….

A very interesting fact about the blackspot tuskfish is that in 2011, a professional diver took some photographs of the fish bashing a clam on a rock to break the shell. This is a very smart fish indeed and demonstrates the use of the rock as a tool, it was apparently the first documented example of tool use in bony fish. Amazing!

The Black Spot Tuskfish, great to catch and even better to eat! If you would like to catch one get out on our Broome fishing charters by heading to absoluteoceancharters.com.au/reef-fishing-charters/