What a month we have had!! New babies, new crew, old crew back again. Good weather, bad weather and everything in between!

It wound be fair unless I mentioned the undisputed catch of the year and newest member of the AOC family right at the top! Little Gracie was born on the 7/5 and mum and bub and doing great. Some of you may have been wondering why Kel hasn’t been answering the phone and emails, now you know why! We look forward to getting her out on the boat later this year for her first trip.

The weather has finally cooled and most mornings require a jumper to keep warm. By 9 am the extra layer is usually off and by midday we have our 30 degree temps. Perfect weather for fishing in Broome! 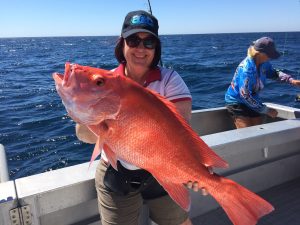 Toby our skipper is getting better and better every day, he is quickly gaining a grasp of where the fish hide when the going is a bit tough. I have always said that driving the boat is easy when the fish are biting, what makes a good skipper is when you can find a fish when the chips are down! Sam, Henry and Mish have been working tirelessly on the deck making sure everyone is happy and looked after and the boat is kept spotless. Sam has been busy learning the tricks of the trade so no doubt you will see him at the wheel of the Contessa C for a few Broome fishing charters later in the year. Most of you that came on charter last year would remember David, the bus driver with the bad jokes. He’s back again and entertaining everybody on the way too and from charter. He even got his name embroidered on his shirts cause he recons no one gives the bus driver any recognition. Make sure you stir him up next time your on the bus.

AOC regulars, Mike and Ang had a month in Broome. Lookout in the near future for the dedicated blog with their fishing stories.

Lots of varied catches have been noted throughout May. Good catches of Blue Line Emperor are starting to appear. Hopefully we have another great run of the Black Snapper later in the season.

One thing we have noticed, the smaller fish have been prolific. Loads of smaller fishing including Blue Spot emperor, Stripey Sea Perch, Coral Trout and Red Emperor have been captured and successfully released. Certainly good signs for the Broome fishing, into the future.

The Spanish Mackerel have been a little hit and miss this month. Most days we spend a small amount of time trolling for these speedsters, as they are great fun to catch but also great on the table. We have lots of gps points and areas of reef where we know they school up. A few minutes trolling tells us if they are on the bite or not and if they are not we just move on. If they are on we will try to land as many as needed before the sharks turn up.

An interesting observation we have made on our Broome fishing charters with the sharks eating our fish. Some days the sharks are not in an area and some days they are. We cant establish a distinct pattern as yet but will keep taking nots on when and where sharks are found to be aggressive on some reefs and not others. One thing we have definitely noticed is, it seems as though the shark are a little less aggressive on the spring tides (larger tides). It may also have something to do with the boat drifting quicker on the bigger tides and maybe drifting away from the sharks. The opposite would occur on the neap tides (smaller tides) when the boat stays in one place for longer and the sharks can locate distressed fish easier.

Keep a lookout for our online booking system on our website www.absoluteoceancharters.com.au
It should be up in the next week or two.

We are looking for another great month fishing in Broome and hope to see you on charter.