November flew by this year, just like the rest of 2017! In between finishing our Broome Fishing Charters and Roebuck Bay Dolphin cruises we were busy preparing for our Broome to Perth trip. For those of you unfamiliar with our operation, it involves taking our mothership, Contessa C, to Perth over the summer for refit. Facilities to slip larger boats in Broome are inadequate to say the least; and we find good peace of mind knowing the boat is not susceptible to cyclones while residing in the southern marinas. 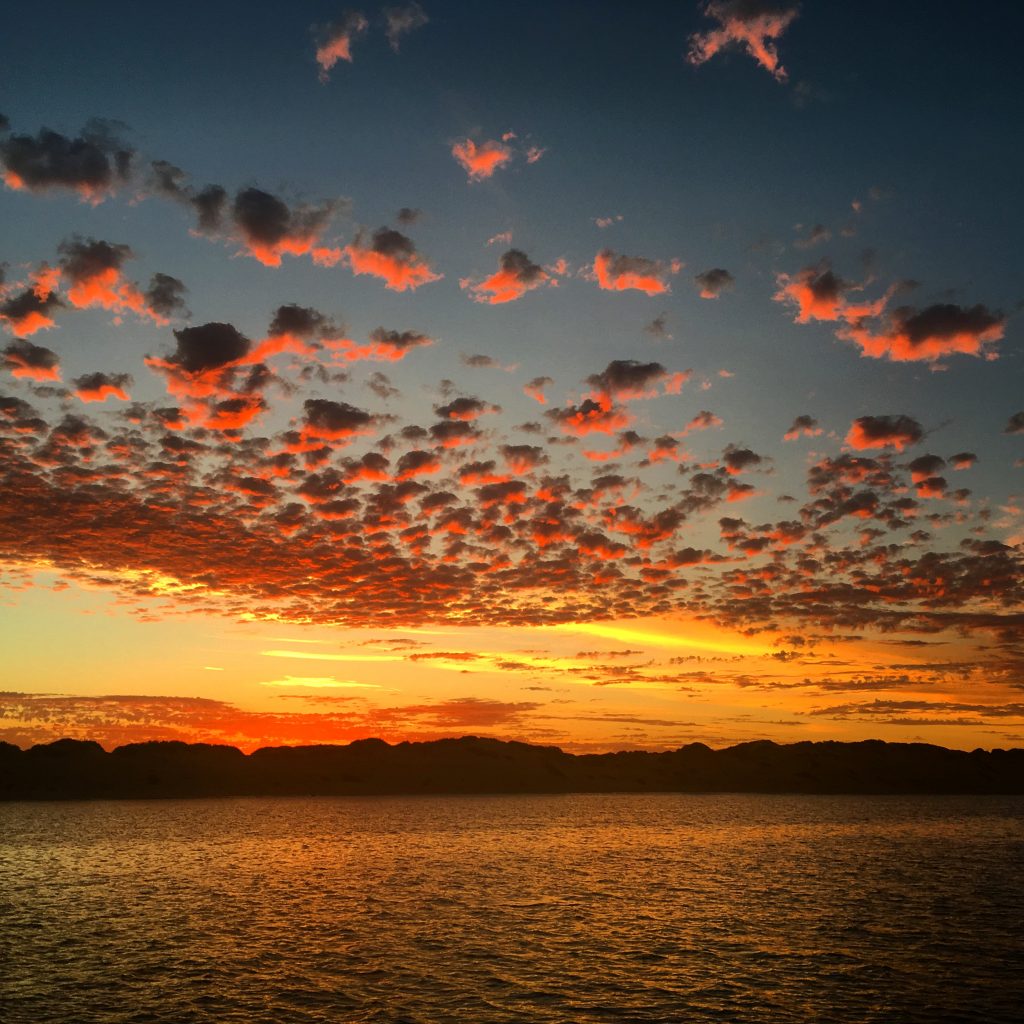 This year’s journey from Broome to Perth would involve an 8-night trip for 5 lucky passengers from Broome to Exmouth. We would then offload the passengers and hopefully some fish, in Exmouth and travel the rest of the way to Perth with just crew on board.

Back in May, a couple of regular customers, Darcy and Pete from the east coast were on our Broome Fishing Charter. They had expressed interest in the Broome to Exmouth run and would see if they could get a keen group of anglers together. With a little correspondence a date was set, flights booked and the trip of a lifetime was locked in. 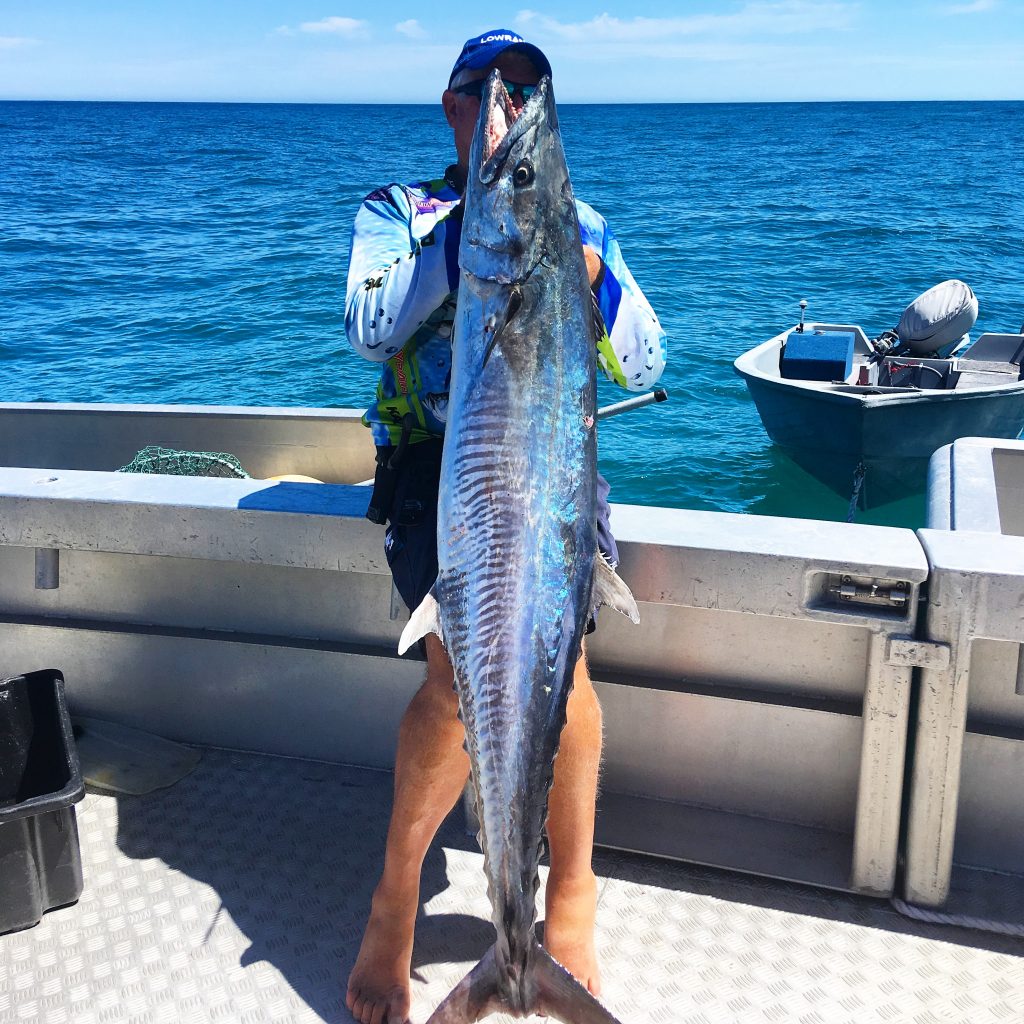 The group arrived in Broome a few days before the departure date. This gave them time to view a few of the towns attractions, relax and stock up on supplies including some fishing gear. These guys are wine enthusiasts to say the least and had a few boxes from their cellars sent over for the trip.

As the date for departure grew closer we finished our Broome Fishing Charters and Roebuck Bay Dolphin cruises packed up all the gear involved with those charters and loaded the boat for the trip south. We fuelled and cleaned the boat, loaded freezers and ice, food, drinks and fishing gear for the trip. We were even lucky enough to have Shimano come on-board as a sponsor and set us up with some shiny new 50w tiagras for the big boys. Our crew did such a great job getting ready we were able to get the passengers on board a few hours ahead of schedule and get underway. 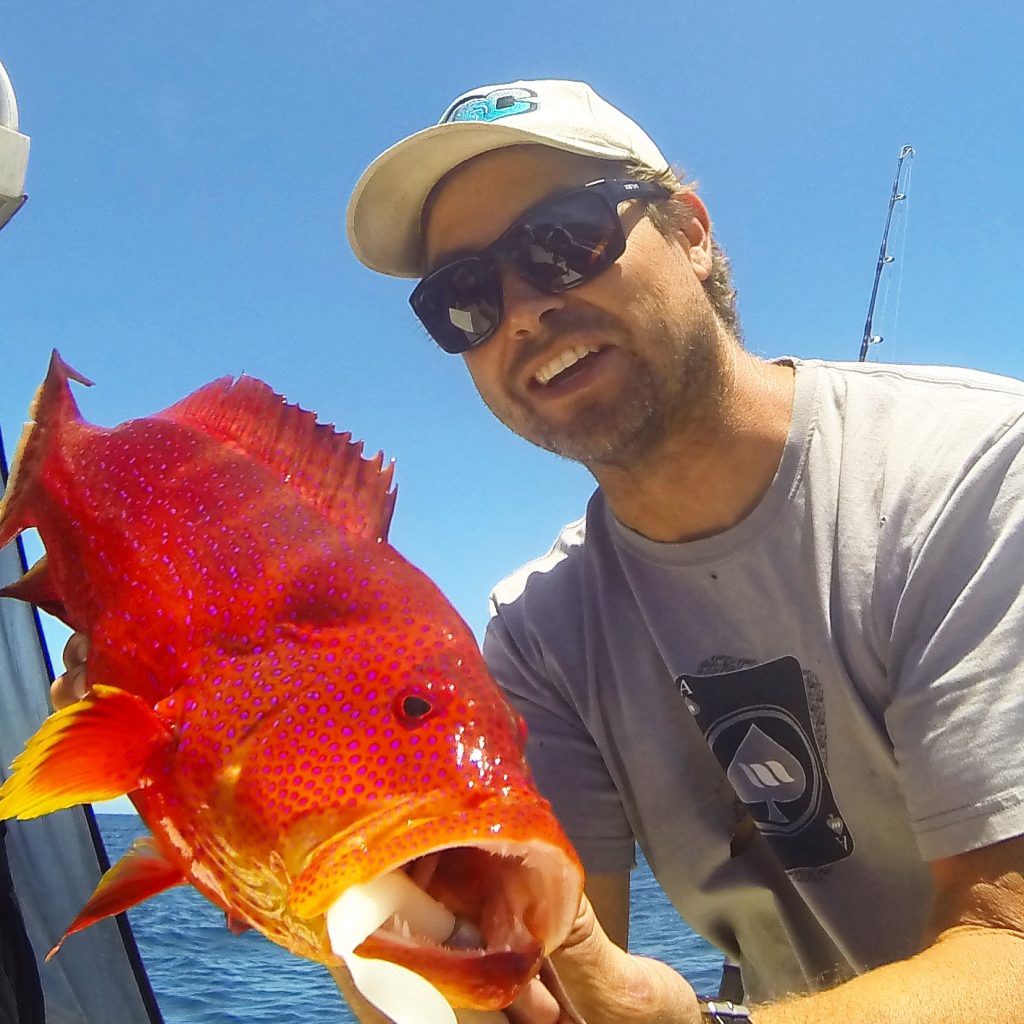 Darcy, Pete, Karl, Terry and Dick arrived with high spirits and great enthusiasm. We ran through a quick vessel induction and got underway. The team spent the afternoon preparing fishing gear and having a couple of sunset drinks. Dinner was sorted the first night with Kel cooking one of her famous lasagne. Around 8pm we were roughly 50nm from Broome and marked up some good fish on the sounder. Keen to wet a line, we dropped in and had a great session landing some nice Golden Snapper, Rankin Cod, Red Emperor and a few big trevally’s for and arm stretch. After a good session landing some great fish we decided to pack it up for the night, we travelled through the night to arrive at some fresh fishing grounds off 80-mile beach. 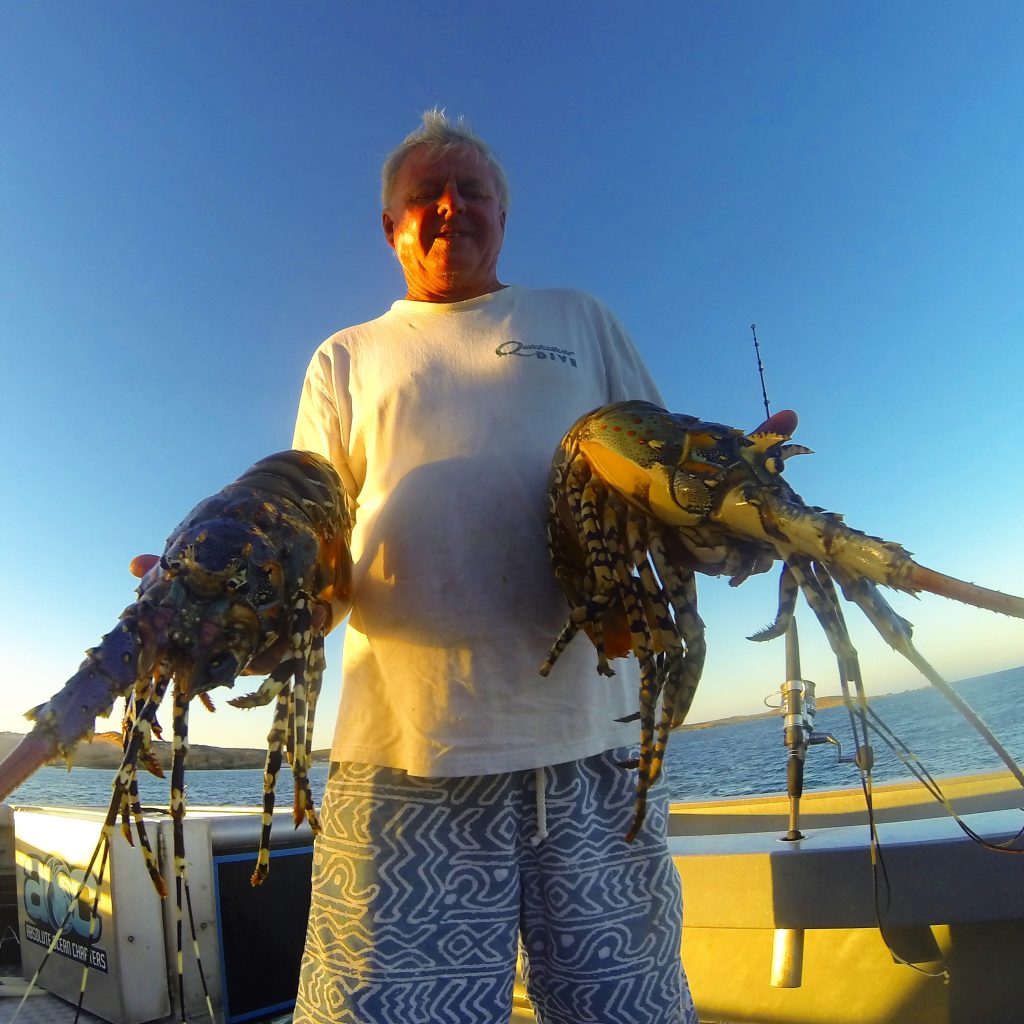 The team was a little weary in the morning after the late night but also the 20kt SW wind made sleeping a little hard. We eased into the day with a couple of bottom drops and a bit of trolling. We landed a heap more great fish but were defiantly finding the Rankin Cod were the flavour of the day, it was hard to get past them at some stages. No complaints though. By the end of the day we had collected a good size bag of fish and with some spare time travelling we got to work filleting and crivacing the fish ready to be frozen. Karl cooked up his special recipe rankin cod for dinner and with the wind abating slightly we set a course for the Glomar Shoals, NW of Karratha.

Around midnight, Jacques came on for his watch and with the wind picking up again we dicided to change course to some other fishing areas we had proved successful in previous trips. We would miss the Glomar Shoals but everyone got a better night sleep with the direction change and it would mean we would be at the Montebello Islands before dark the next day. A good move, considering the wind was forcast to increase over the coming days.

As the sun came up on the second morning, the wind moderated slightly and we got an early start to try to get a good feed of bottom fish before we got to the Montebello Islands. We spent the morning catching Red Emperor, Goldband Snapper, Coral Trout, Long Nose Emperor and of course….. Rankin Cod. We fished until 2 pm and then processed the fish as we travelled towards the Montebello’s. Vodka Beach was a welcome sight as the westerly wind pushed past 20 kts, we arrived in time to see the sunset and cook some dinner in the lee of the islands. While having dinner and drinks, we caught a few squid and fish under the lights of Contessa C.

Everyone had a great sleep in the shelter of the islands and we had a couple of anglers up early, while some had a sleep in. We boarded the polycraft with the early risers and some light fishing gear and headed to some nearby rocky outcrops to cast plastics. After landing a few fish we headed back to the big boat for breakfast. Mudcrab was next on the list so we weaved our way through the reefs and rocky outcrops until we found some suitable mangrove trees. The team was keen and hunted through some mangroves trees and rock caves being careful not to fish in the sanctuary areas. We were lucky enough to come across a couple of massive muddies that would be great for dinner. That arvo we dived and caught a couple of nice Ornate Lobster and speared a Coral Trout. Dinner that night was mudcrab, lobster, coral trout and oysters….. washed down with a couple of cool drinks. Spoilt!!

The next day the wind was still up so we spent the day tucked up in the islands again, collecting our dinner. We fished, dived and speared some delicious creatures that kept us well fed. The scenery around the islands is spectacular and you can spend hours cruising around in the tender exploring the bays and coastlines. The weather forecast showed the wind to be dropping slightly the next day and the dropping right out for the last 2 days of the trip. Thant night we cruised along the beach just after sunset and observed the turtles coming up onto the beach to lay their eggs. 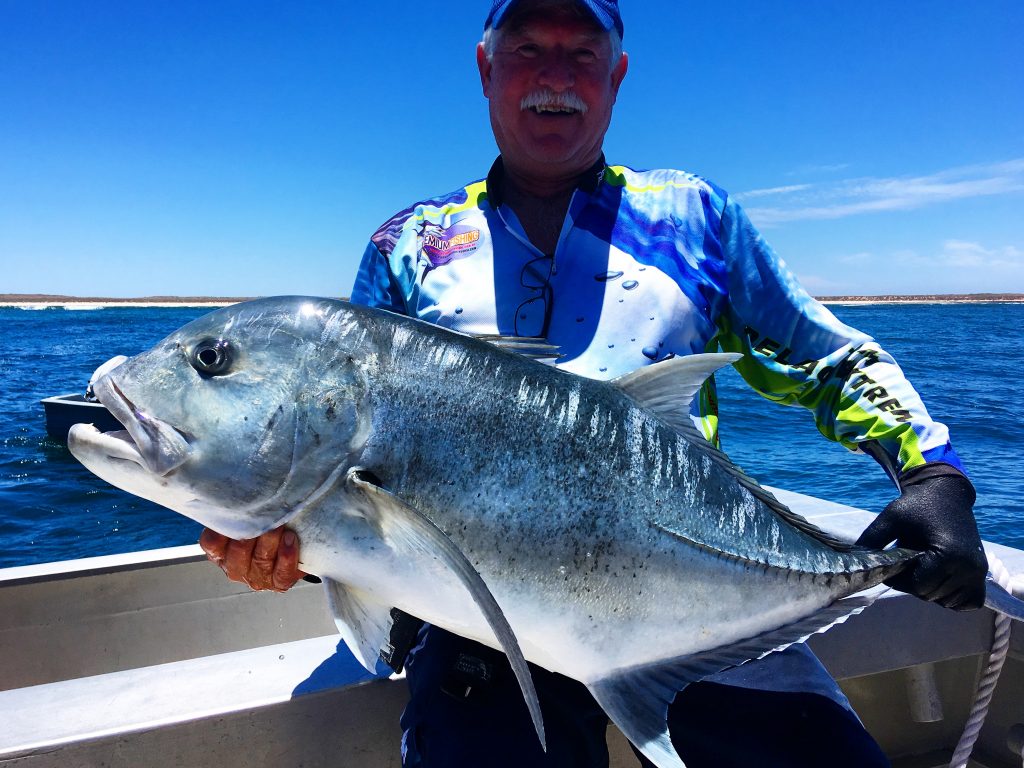 The forecast was right and the wind had dropped slightly, we made the call to visit Tryal Rocks, and area of reef roughly 12nm to the Northwest of the Monti’s. We trolled our way out there catching a few Mack Tuna and a Barracuda to keep us occupied. Once at the rocks we found some suitable reef and set up a drift. Some decided to fish with bait and other to cast light weighted plastics, we caught a few fish….. mostly small cod and emperors until Pete hooked up to something solid. We all called it for a shark and after a 10-minute wrestle he had it boat side. It wasn’t a shark! It was a massive Potato Cod, approximately 1.5m long. As soon as we realised it was a protected species we released it unharmed and it swam off to terrorise the fish on the reef. After a few more drifts and a bit of trolling we have a good feed of fish for dinner, the wind was picking up so we made the call to head for the shelter of the Islands.

Next morning, we were treated to calm conditions so we manoeuvred Contessa C through the reef on the West side of the islands, once in some deeper water we deployed some deep diving lures and it didn’t take long and we were hooked up. After a quick fight, we couldn’t believe our eyes…. 2 Coral Trout on 1 lure. This was going to be a good day! We trolled our ways south along the back of Barrow Island catching more Coral Trout, some massive Giant Trevally and 1 very, very large Spanish Mack. The afternoon came around and we found ourselves in some deeper water around the 100m contour so the Tiagras came out with some pusher lures and we tried our luck for a billfish or tuna. Not long after one of the reels screamed into action and after a quick fight a big Barracuda was landed and released. The westerly wind started to puff a little so we made a call to anchor behind Surier Island, we trolled towards the Island in hope of 1 last fish. Just as we were about to pack it up, we were on…. This was a bigger fish and had no dramas pulling a large amount of line off the smaller 30w Tiagra. The rest of the gear was hauled in and we settled in for a fight. After retrieving a good amount of line and getting the fish back close to the boat we though the fight may be over, the fish had other ideas on took off on a blistering run. Bang!! The line snapped just out of the rod tip and it was over. We dropped anchor in the sheltered water, cooked dinner and pondered the one that got away.

After getting a taste of the big stuff, the last day was to be spent trolling the 200m to 300m water north and west of the Exmouth lighthouse in search of a Marlin. The morning progressed with not a lot of success so we baited up and had a drop on some nice looing reef in 100m. Up came a few good fish for our last night’s dinner on board before the sharks moved in. So, it was back to the big pushers for one last chance at a billfish. It was a glassy calm, overcast afternoon and the water out there was so clear and deep it looked purple. We were visited by some friendly dolphins but no fish. Nobody really cared about the fish and we just soaked up the atmosphere and enjoyed the last afternoon on the boat. 3pm came around and we headed for the Exmouth marina. As the sunset, we secured the ropes to the service jetty and began the pack up, before retiring to bed, weary from the last 8 days of action.

Morning came around and we said goodbye to our friends….. They departed with some great fish but more importantly, some great memories that will last a lifetime!

As we departed the Exmouth Marina and headed for Perth I couldn’t help but reminisce about the good times that we had just had. A big thanks to Darcy, Pete, Karl, Terry and Dick for making this trip what it was! 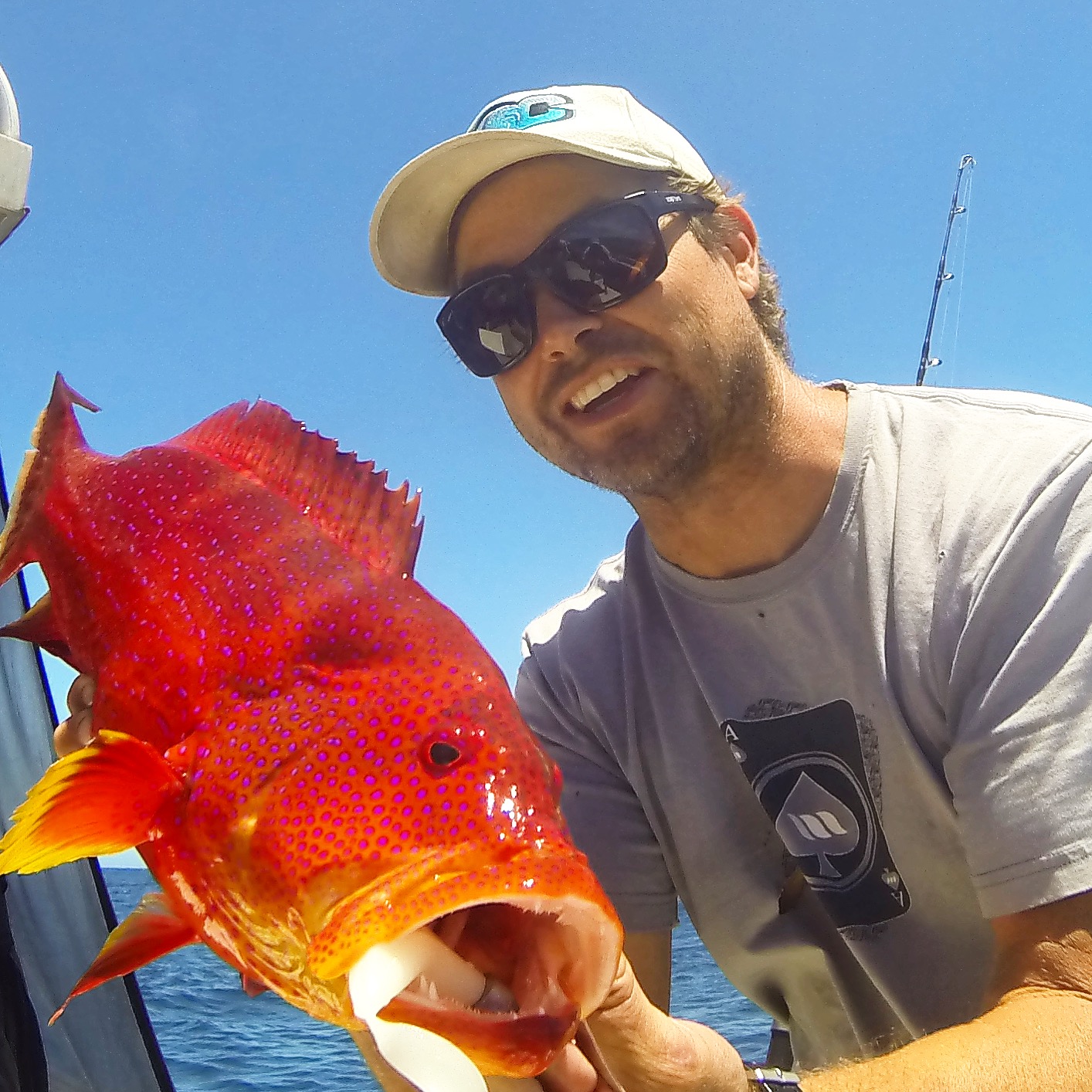