The Giant Trevally or ‘GT’ as it is affectionately known is somewhat of an icon all over the world. Often when driving the boat on our fishing charter in Broome I am asked by customers, ‘will we catch any GT’s today?’ indication just how popular and well know this fish is. The Giant Trevally is renowned worldwide for its tough fighting ability, nothing will stretch your arms and test your fishing gear like a freshly hooked GT. Caranx ignobilis, the Giant Trevally is the largest of the Caranx family and can grow up to 170cm and 80kg. Although, I don’t imagine too may specimens that size would be caught on rod and reel. Some of you that may have attended our Broome Reef Fishing Charter would have most likely tackled a Giant Trevally or two and witnessed first hand their awesome power. 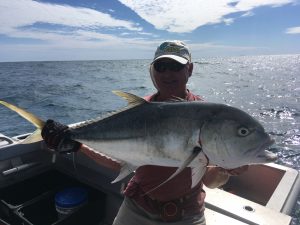 The Giant Trevally can be easily recognised by its sharp tail flukes, steep head profile and silver colour. Although often, customers mistake the GT for their relative the Golden Trevally. Occasionally they may have darker spots and some males may become a blackish colour once they mature.

Most of the Giant Trevally’s we catch on our fishing charter in Broome are found on deeper offshore reefs, usually there is some heavy structure like a cave or big ridge but I do know of a couple of spots in the 40 to 50m range where the bottom is flat that we often encounter schools of GT’s. They can also be found inshore around coastal reefs, bays and smaller juvenile fish can be found in the upper reaches of estuary systems. The biggest Giant Trevally’s we have encountered on our fishing charters have been at offshore atolls like the Rowley Shoals, outer reef systems at the Montebello Islands and certain Rocky outcrops in the Kimberly.

Most of the really big trevally we have caught on our fishing charters in Broome have been while trolling with big hard body lures. The smaller Gt’s we catch on charter between 50 and 70cm are usually taken on bottom fishing gear with baits of squid and fish. In the areas where the fish school up, they will virtually take anything thrown at them, soft plastics, metal jigs, feather jigs and we have even caught one on a teaspoon with a hole drilled in it so we could tie a line and hook to it. 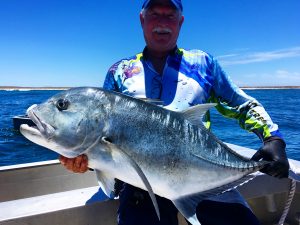 The good news is, the Giant Trevally grows relatively fast meaning they are less susceptible to overfishing. They reaching sexual maturity at three years of age when they are around 60cm. The GT is not rated too highly as a table fish; however, it is definitely edible if treated and cooked correctly. Best method is to bleed the fish out straight away, when filleting be careful to remove all red meat and blood lines from the white flesh. The fillets can then be sliced thinly and crumbed and shallow fried. Another popular way to cook the fillets is in a Thai green curry…. Delicious!

If you would like to test our tackle and your muscle on a Giant Trevally on one of our Broome fishing charters checkout our website absoluteoceancharters.com.au/reef-fishing-charters/