From diving and fishing the Dirty South, to fishing the isolated rugged coastline of Broome Henry has done it all. Hear about Henry directly from the man himself below…

Two completely un-comparable places, the South & North of Western Australia! Coming from my home of 18 years; the beautiful southwest coast of Western Australia, the fishing just doesn’t compare to the turquoise waters of Broome. A good day fishing in the south is few Dhu fish and a couple of snapper. A good day on a fishing charter in Broome, is an esky full of red fish, monstrous cobia and the chance to fight a few game fish like Spanish Mackerel. 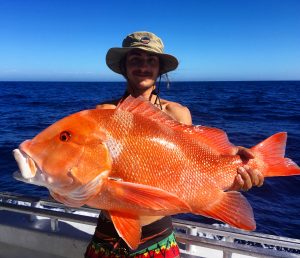 Moving from the southwest to Broome was a drastic change to my lifestyle. From surfing most days of the week with one or two days fishing back home, to fishing and diving every single day in the diverse waters of Broome. I was hooked on fishing in Broome from the word GO.

My first taste of the north came with a five day voyage from Mandurah to Broome, fishing along the way. I had no idea just how harsh the heat was in the North, I was completely unprepared. Once we reached the coast of Exmouth I was hit with the full force of heat with a nice day being about 30 degrees, however most of them were about 40. With this change in weather, came a change in water temperature and with this change in water temp came a change in biodiversity. Turtles and sea snakes became obstacles in our course, they were absolutely everywhere. Something that I had never experienced. Every now and then we would come across a ball of sharks fighting for bait fish. Along our way we would stop and see if we could snag a few Cobia or Tuna from in between the razor-sharp jaws of these abundant predators that heavily patrol this coast line.

My first of many fish came off of the North West’s Montie Bellow islands. Mick dropped us into a secret spot in about 40 metres of water. As soon as I hit the bottom I experienced nothing I had before. The sheer force of an 850cm Red emperor took me by surprise and after an awesome struggle we had this top table fish on the deck. After this drop we experienced lots more fast-pace action, with big Rankin and cracking Saddle Tails. Little did I know, this fast pace would not slow down.

Every day on our Broome fishing charters, aboard our 20 metre Monohull vessel, the Contessa C, fish come flying up from the deep blue. With a maximum of 14 lines we find ourselves running from one line to another hauling in fish. In this game there is no room for error, this action is something that I continue to enjoy, waking up every morning with a smile on my face ready to go, making people’s day with the fish we put them on to. To me this job is more like a holiday, every day bringing new and exciting fish from the depths, I am still mind boggled at the diversity in fish.

I look forward to sharing some truly memorable moments with you aboard our Broome Fishing Charters. Broome fishing is like nothing else.