Many of you may know how the Absolute Ocean Charters story began. Yet as part of our first e-news edition, we thought we’d provide a brief recap.

The team behind Absolute Ocean Charters launched off the pristine white sands of Cable Beach 12 years ago and haven’t stopped spinning reels since!

Absolute Ocean Charters (AOC) is a small family owned and operated business, located in Broome on Western Australia’s north coast. Founders and managing directors, Michael (Mick) & Kelly Woodley started their voyage with AOC in 2009 after they had each spent more than 10 years and countless hours working and living on the local Broome and Kimberley waters. Both began their Kimberley careers in the pearling industry before testing out the waters in the charter world with other Kimberley charter vessels. Mick was a drift diver for a local pearl company collecting wild pearl shell to grow pearls, Kelly also spent time working in an aquaculture/marine science environment learning about fish life cycles and breeding patterns. To know what life is like underwater means to fully appreciate our role on the surface. However, as this work was seasonal, both Mick and Kelly travelled extensively overseas for several years, working on prestigious super yachts learning the ropes of five-star international hospitality, then returning to Broome in between international work seasons to continue with the seasonal pearling and charter work here. It was during one overseas trip that they both decided they wanted to turn their passion into their own business. So the business model for AOC was formed when at sea somewhere in the Mediterranean. They both have a special love for the ocean and firmly believe in going the extra mile to make every guest’s experience a positively memorable one. A motto that has not swayed since they began.

AOC began with just two staff (Mick and Kelly), daily charters, a 12m long fishing vessel named ‘Utopia’ and they booked and paid for taxi services to pick-up and drop-off their guests for their charters. These days, guests are transferred in one of two designated transfer buses to their awaiting sealegs amphibious tender vessel (or also known as the mechanical camel ride!) that then carries guests out to the state-of-the-art 20m long ‘Contessa C’ mother ship to kick-start their adventure! From the original team of two 12 years ago, the AOC team now consists of up to ten permanent full-time and part-time staff each season (April to November). AOC takes care of everything needed for a day on the water, so guests can concentrate on having the best time!

So 12 years later – AOC pride themselves on being the longest operating fishing, whale watching and wildlife eco cruise charter company in Broome, offering guests the ultimate fishing experience and sensational sightseeing day out.

Pictured below are Mick and Kelly in their happy place on the ocean. 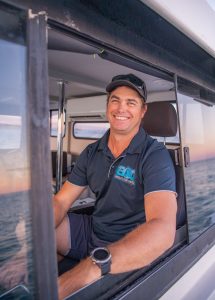 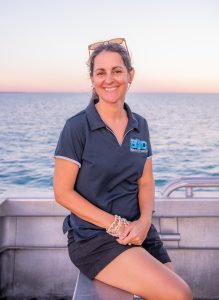